Andrew Joseph
Toronto, Ontario, Canada
Andrew was born in London, UK, raised in Toronto, Canada, and cavorted in Ohtawara, Japan for three years. He is married, has a son, a cat named Freddy and a dog named Shaggy (after the dudes in Scooby-Doo). He has over 35,000 comic books and a plethora of pioneer aviation-related tobacco and sports cards and likes to build LEGO dioramas. Along with writing for a monthly industrial magazine, he also writes comic books and hates writing in the 3rd person. He also hates having to write this crap that no one will ever read. He also writes an aviation blog: Pioneers Of Aviation ( https://av8rblog.wordpress.com/ ) - a cool blog on early fliers. He also wants to do more writing - for money, though. Help him out so he can stop talking in the 3rd person. 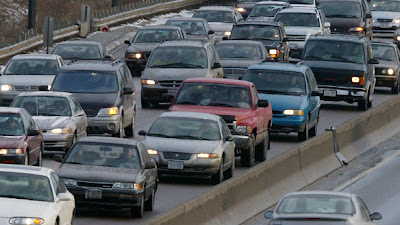 Do you know what I hate?

No... not the awesome rock group featuring Steve Winwood. Rather, I hate the stuff that happens on the roads...

But not just any traffic, what I really, really hate is the incredibly incorrectly named entity known as "rush-hour traffic."

Talk about your oxymorons!

There is nothing remotely 'rush-like' about rush-hour traffic.

In fact, there is nothing remotely like an 'hour' for rush hour traffic.

For those of you that don't know, for traffic, Toronto is the fourth-most congested region in North America, behind only Los Angeles, San Francisco and Chicago.

What's confusing, is that we are ahead of New York City... and NY is not even number 5! Nope... Number 5 is Houston! Houston! What the hell is causing all of the snarl ups there? A cattle drive? Sorry... that's unfair to the beautiful city of Houston. Except for the smell of oil in the air, Houston is a nice-looking place.

Actually, I have heard reports that say that Toronto is actually worse than LA.

Via driving... I get to work at 8AM, and I leave at around 7:20 - that's 40 minutes. That's not bad considering the first eight minutes of the trip are on suburb roads, with the remainder of the trip on a highway - so I'm not complaining about THIS morning trip.

You just can not make the 28 kilometer trip in 40 minutes, with a 55-minute journey more of a norm.


How is possible to spend so much time in traffic?

That's one of the reasons why I decided I would start work early.  Since I now start at 8AM, I leave at 4PM.

Traffic? Look... 10 years ago, I used to work in the same area... it would take - including a traffic light - one minute to get to the highway... and this was me leaving at 5PM.

Now in 2012, leaving at 4PM when it is not supposed to be as busy as the 5PM crush, I spend five minutes in a line waiting for the right to get on the high way and vegetate,


Let's look at yesterday, as an example...  I got on the highway in about five minutes - Highway 401 at Leslie heading west.

I adroitly manouevered four lanes over to get into the Express lanes, and then a further three lanes into the 'passing' lane, otherwise known as the fast lane.

For some reason - on that trip - myself and everyone around me was moving! Nine times out of 10 the highways are so bunged up that you can just barely get over one or two lanes from the Leslie entrance.... and you are left to guess which conga line to choose  - the "Express" or "Collectors".

We're all flying on the highway making incredible time... and then... brakes.

While no one had to squeal or smoke their tires to stop, stop we did... hitting exactly 0 kph (0 mph) and holding for 30 seconds.

By why did we have to stop?

There was no accident. No police cars looking to bust speeders. No disable vehicles... nothing. Just volume.

Look... I know that Toronto is a busy city full of busy drivers heading out to the suburbs to the east, north and west... but this highway - Highway 401 while cosmetically changed, looks exactly as it did when my dad first drove the same roads back in the late 1960s.

Nothing has really changed on it except that there are more cars on the road nowadays.

What will it be like in five years? Ten? Twenty? God help me. but I may still be working 20 years from now!

My commute and the commute of everyone on this highway is going to be stupid.

How can a Toronto commute take almost as long as an LA commute? We have fewer people. Do we have fewer cars than LA?

But here's the real kick in the balls. No one really has a plan to alleviate the situation.

They almost had a plan.

First proposed in 1959, but opened in 1997, the Ontario government constructed Highway 409 across the top of the City of Toronto - in an effort to alleviate the traffic congestion across teh middle of the city and Highway 401, as well as at the foot of th city along the Gardiner Expressway.

A great idea... except they decided to make it essentially a toll highway... totally screwy consideringthe rest of the highways in Ontario are toll free.

After a few years of not making any money from it -  it's a FREE-way, why should we pay for it when our already high taxes should be paying for it!! - the Ontario government sold it to a private firm.... who continue to charge the consumer on a pay as you use it scenario.

I've never driven on that highway in the 15 years it has been open.

Urban planners in Toronto are failing the people.  They have ben since the 1950s. I can almost believe that the urban planners who created the highway system had high hopes for the future, fully expecting that future planners would not drop the ball and would continue planning Toronto's transit well into the future.

But... aside from mninor repairs and cosmetic changes here and there, very little has been done to  relieve Toronto of its traffic constipation.

Toronto's highways are a farce. Urban planners need to be retired.

Currently, the solution for all of Toronto's woes seems to be to add more public transit...  like add a few more train stops for the Toronto Transit Commission (TTC). Meanwhile, because of money problems, the TTC is either cutting routes, or is cutting the frequency of routes for its buses.

Great! More subways. More trains. But fewer way for consumers to reach them.

So... how long would it take me to get to work if I took the public transit system? It would take me 1-1/2 hours to get to work... unless the Toronto Transit Commission decides to cut some more routes or service on routes...

Even adding more train stops is not going to do it. Not where I live, which is a 20 minute walk or a 10-minute bus ride to a pair of train stops.

TTC? It stands for: "Take The Car." That's an oldie but goodie.

What is the solution?

It's easy to bitch without at least postulating a solution - so let me try.

I say we should construct an overhead highway that runs atop and parallel to the Highway 401 - and add further overheads to the other two over the ensuing decades...

It should look exactly like the one that collapsed in Oakland back in 1989 when a massive earthquake hit the Bay area. 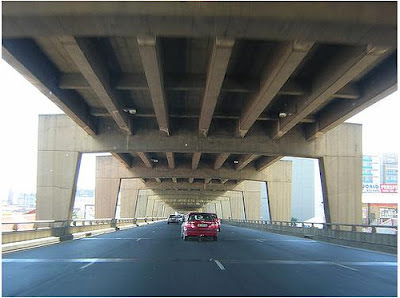 The good news for Toronto residents is, that except for a few minor tremors that feel like a truck is driving by outside your house, Toronto is not afflicted by earthquakes as a concern.

The problem then comes to where is the money coming from to construct it?

But what about all of the city workers or construction crews? I am sorry to say, but screw'em. Supply and demand. We demand cheap and affordable construction, and we can get it supplied by a chain gang.

Look... maybe a construction crew can still be used to ensure the roads are up to code... but why don't we use grunt labor available to us.


They are prisoner volunteers who get paid, of course... and they can be rotated in and out of service after a week, and maybe they get some time off... but, it's a chance to really repay their debt to society by helping make it a better place - rather than just sitting in jail, lifting weights screwing the little guy up the ass... you know... like the Toronto commuter...

Do you know what I hate?
Rush hour traffic.
Posted by Andrew Joseph at 2:00 PM

Creator of this blog assumes no liability for comments issued by others.
No racists, sexist or religious comments. It's okay to hate someone or something, but let's not be jerks about it and stoop to their level. No swearing. Lets be eloquent in our hatred of people and things that tick us off.